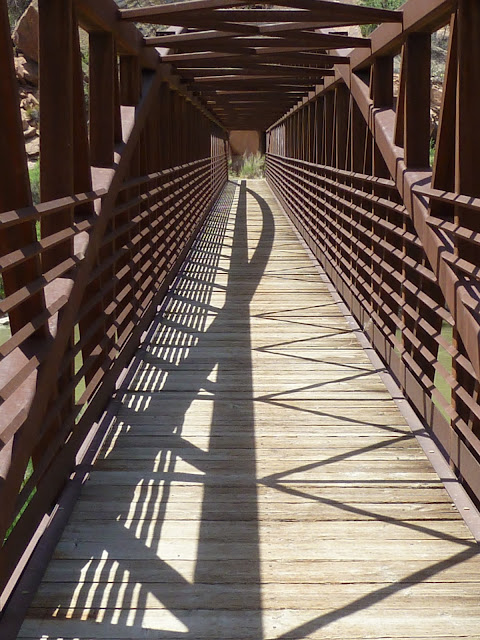 Jess and I wanted to go backpacking, and I was very keen on visiting canyon country again, and since spring (before it gets 100 degrees out there) is a good time to do this, I forced Jess to accompany me across the state to Dominguez Canyons National Conservation Area, south of Grand Junction. I had never heard of this place before I found it on the internet and didn't really know what it would be like... the few pictures I saw didn't give me a complete idea.

What we found was a natural area of rust, green and pewter colors; the red rock canyon walls were blooming with spring growth, and in the inner canyon, igneous and metamorphic rocks had been exposed that stood out in a silvery contrast to the red. 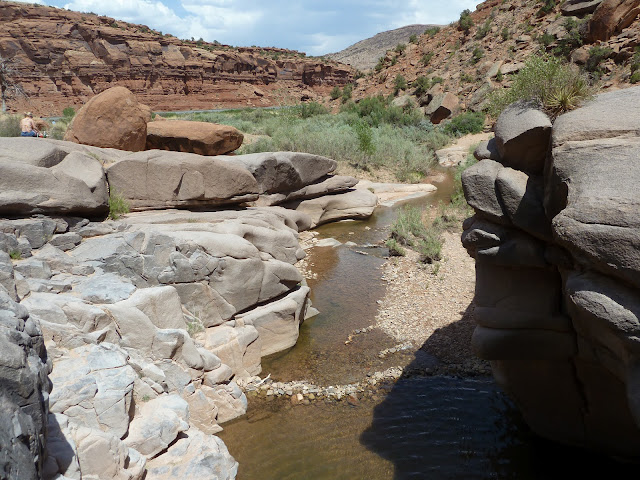 We had determined to hike up one of the creeks, cross over the high ground between them, and hike back down the other. Some things we saw: 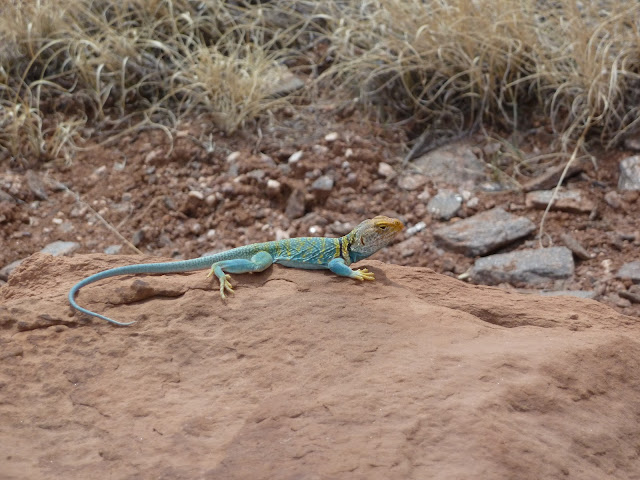 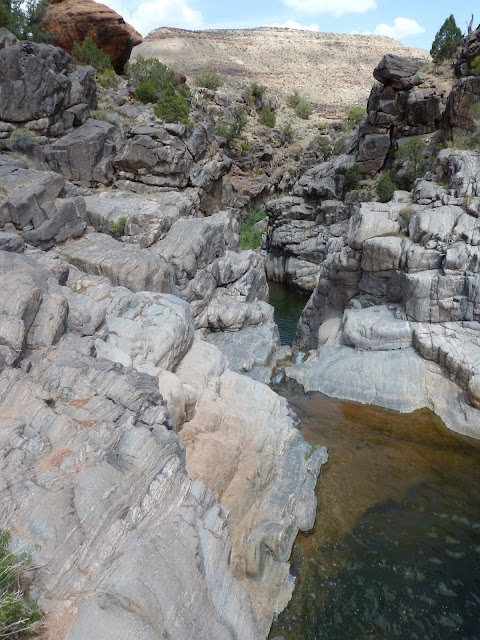 There were many pools with small waterfalls, and we stopped to swim. The water had warmed up just enough for this to be enjoyable, though it was still pretty cold. 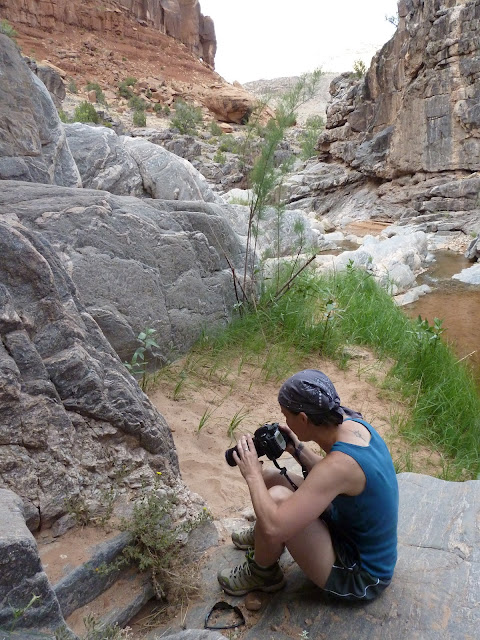 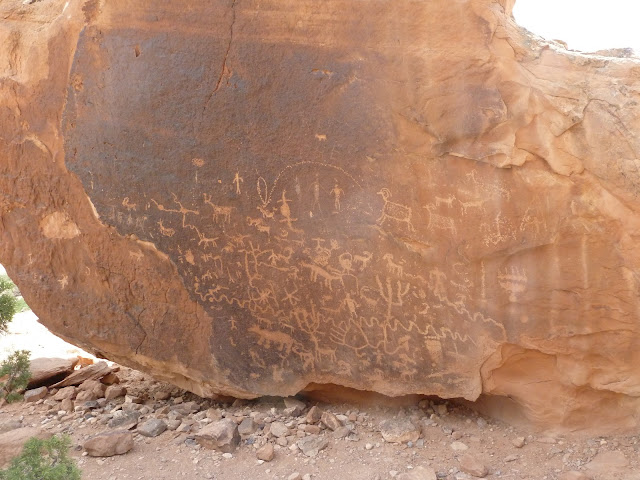 Petroglyphs along the trail.

At some point we realized that we'd been hiking all afternoon and still had not reached the junction of the two trails, one heading up Big Dominguez Canyon and one up Little Dominguez, marked on our maps. This did not make any sense. It was only a couple miles from the trailhead and we'd been walking for hours. Slowly the idea crept upon us that perhaps there had been no sign for the junction, and we had walked up one trail without seeing the other. And without knowing which trail we'd taken.

This was something of a dilemma, as we'd planned to cross up over the cliffs from one trail and across to the other. If we were in Little Dominguez Canyon as planned, we'd need to go over the cliffs on the north side of the trail. If we were instead in Big Dominguez Canyon, we'd need to cross south. If we chose the wrong direction, we'd end up in middle-of-nowhere wasteland somewhere between Delta, Grand Junction and Utah.

There was one hint that might help us: if we happened to be in Big Dominguez Canyon, we'd hit a junction with the Cactus Park trail at some point. And it damn well better have a sign to mark it.

We walked until Jess's feet were beginning to fall off. And I said, "Just ten more minutes." And we saw it: the sign. And then we knew where we were, and moments later found a campsite with a firepit and some flat ground for the tent, and set up to cook supper on a rock by the creek. 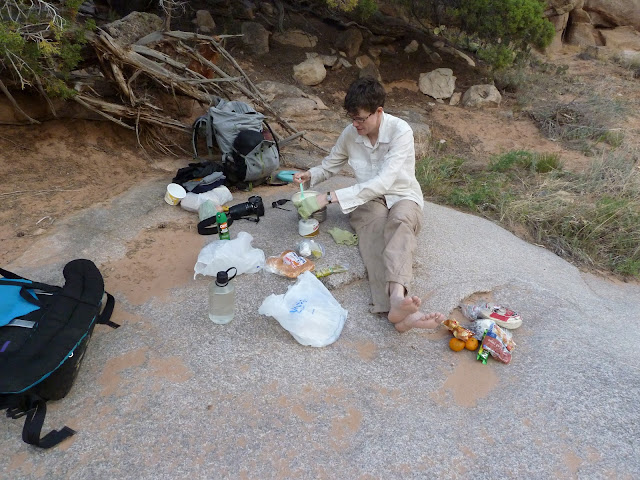 I had brought frozen hamburgers, and by the time we reached camp they were thawed and ready to be cooked. We continued with our habit of documenting our meals, as if the ability to create a meal in the backcountry was a more impressive accomplishment than getting out there in the first place. 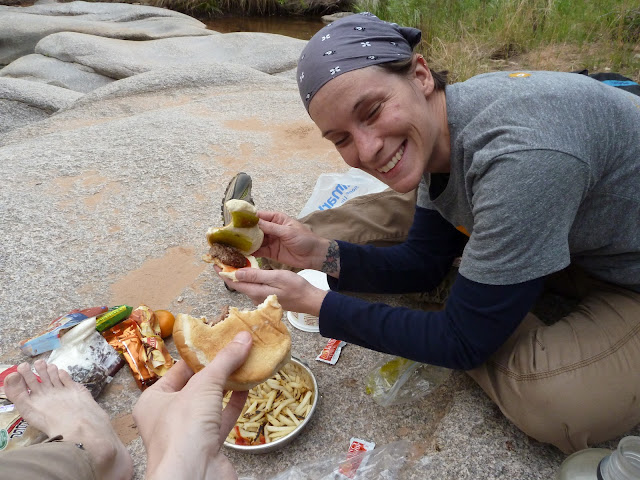 With pickles and french fries. 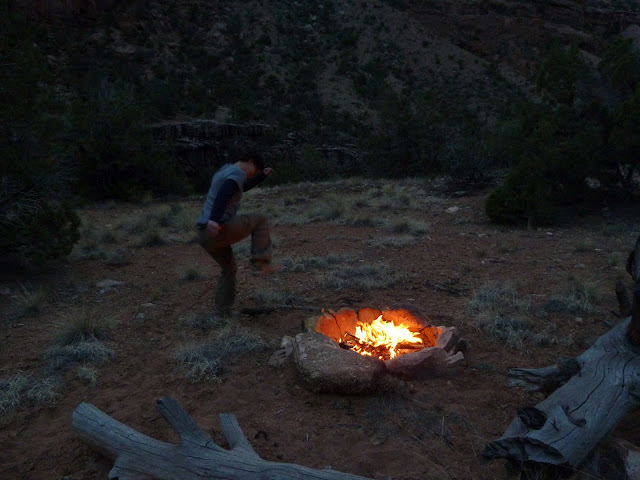 Jess breaks a stick for the fire. She was having trouble until I told her she had to yell "Hii-yah" when she broke it, like a karate master. 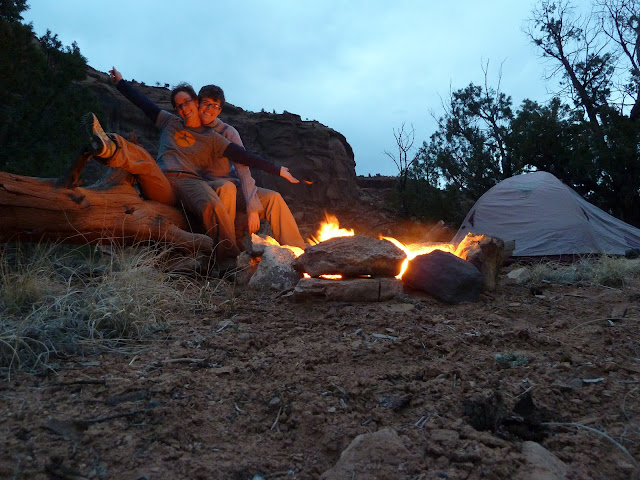 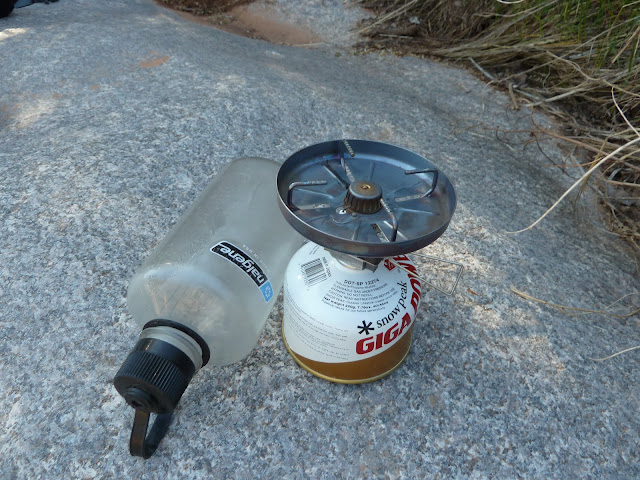 Before we went to bed last night, Jess had dropped the valve of her water bladder in the creek, and we boiled it to kill any parasites. She turned off the stove and, later, I picked it up and set it in the grass away from the creek, because there were too many signs of flash flooding closer to the creek and I didn't want it swept away if we had a storm during the night.

In the morning, I came down and noticed that the pot of water that'd been sitting on the stove (for no reason; I just hadn't dumped it out) was empty. My mind was still trying to comprehend this as I picked up the pot and immediately dropped it when it scalded my hands. It was hot. The stove was hot. The stove was hot and the gas canister was empty.

I fussed with the piece of wire that works as a switch for the stove, noting that it could be turned a bit to the right. It had never been turned all the way off. Neither Jess nor I had noticed that it was still burning with a tiny flame when we put it away. When I put it away in the grass. I could have burnt down the entire park. I would be making this blog post from jail. As it was, the worst that happened were some deposits at the bottom of my pot, and an empty fuel canister when we still had three days remaining in the backcountry.

We had power bars instead of oatmeal for breakfast. 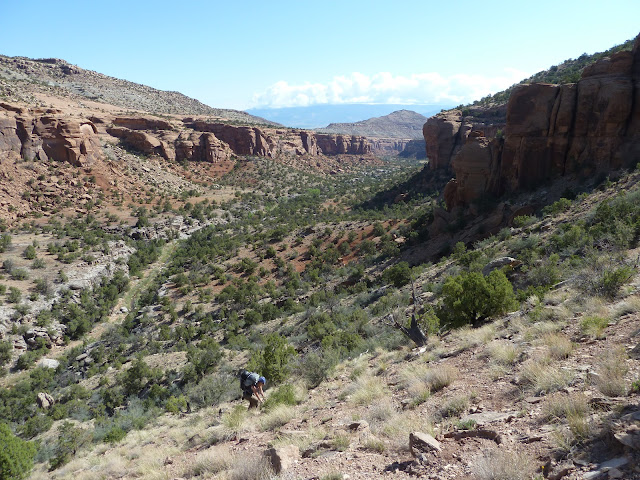 Then, up-and-over. We happen to have camped next to a spot where debris had slid down the canyon walls, over the vertical cliffs of red rock, allowing us to scramble up without climbing gear and without danger. We were lucky; though I hadn't been paying precise attention during the whole hike the day before, this was the only place I'd seen where such a climb was possible.

We went up and up and up through trailless scree and brush. It was exhilarating to me; I love trailless areas, wilderness exploration, feeling like I'm stepping where maybe no human being has been before. It was extremely steep and took a lot of energy but I liked that too. 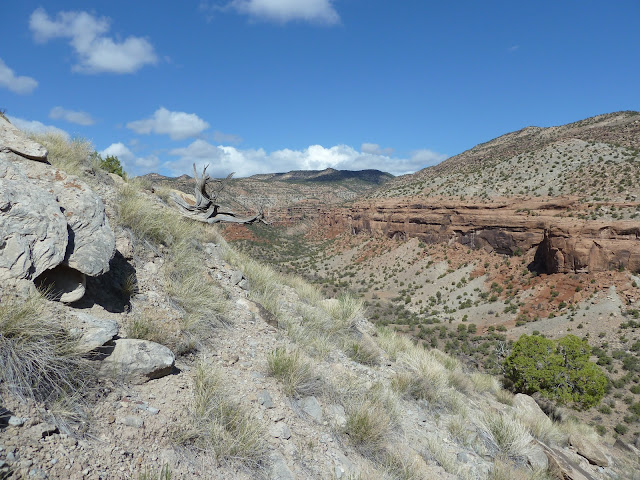 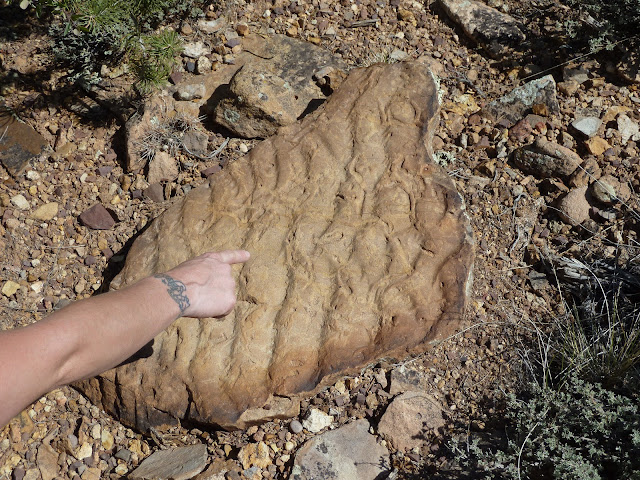 Jess finds some ripple marks, made in an ancient sea that once covered the continent.

We finally got up to the top and found ourselves on a tree-denuded prairie with wildflowers and signs of grazing. We had crossed out of the NCA boundary and onto regular BLM land. As we began the hike across the (relatively) flat grass, clouds began to build. Dark clouds. And there we were on the highest land around, trees few and far between.

There had already been a problem with our crossing between the canyons, that being that we didn't know exactly how we were going to get down into Little Dominguez. There seemed to be a trail that came up through the cliffs onto the plateau, but the map wasn't entirely clear. We had a day's worth of water, but there was none on the plateau. If we couldn't find a way down into Little Dominguez we'd be pretty thirsty by the time we backtracked to Big Dominguez. I'd been confident enough of getting down that I'd been willing to take the risk, but the appearance of the storm clouds was a concern.

If the storm came overhead, we might have to hunker in a ditch while it passed. For how long? One, two, three hours? That would take away time that we'd need to be sure of finding a way down into the other canyon before dark. Suddenly the risk level passed some invisible tick mark in some invisible meter of personal comfort that I carry inside me, and I was no longer willing to keep crossing the plateau. We turned around and went back down into the sunlight, towards certain water. 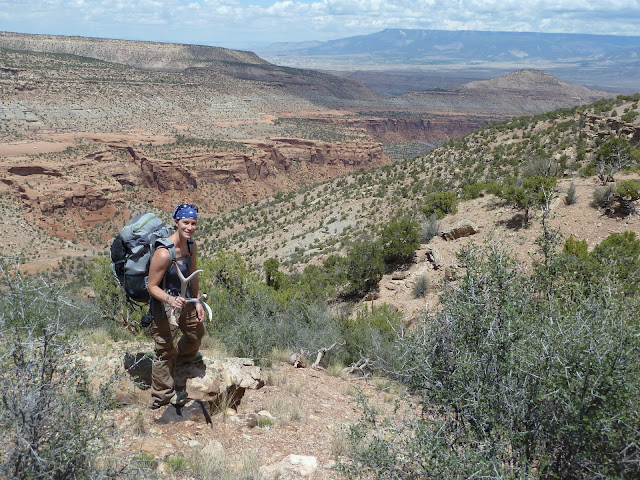 Jess found an antler on the way down. 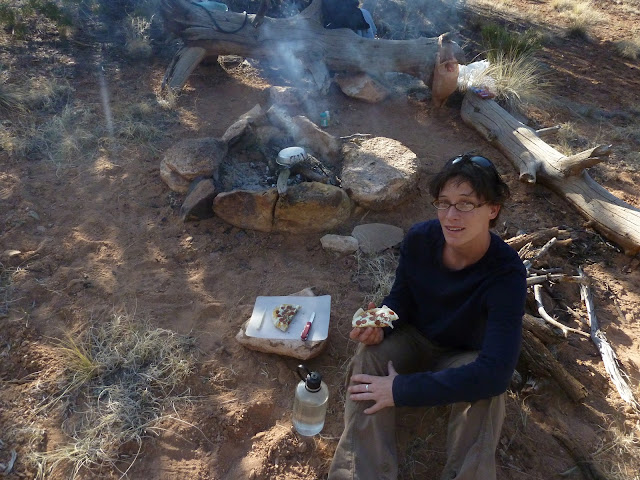 Cooking pizza over a fire was pretty easy. But the next morning, oh my God. I never never tried to boil water over a fire before. It might not have been so bad except that I hadn't brought any tools to pick up the pot with, figuring I'd use natural implements from the wilderness. Well, the sticks and rocks I tried to lift the heavy pot with were not especially well-crafted for the occasion, and twice I dumped out all of the (painstakingly hand-pumped, filtered) water onto the fire, putting out the fire and necessitating both more pumping and a fresh round of fire-building. After that I decided I wasn't allowed to try to pick up the pot anymore and left it to Jess.

After breakfast we decided to hike back, try to find the initial trail junction, and continue out into the other canyon that way, and so began hiking out on the trail we'd followed in the day before. 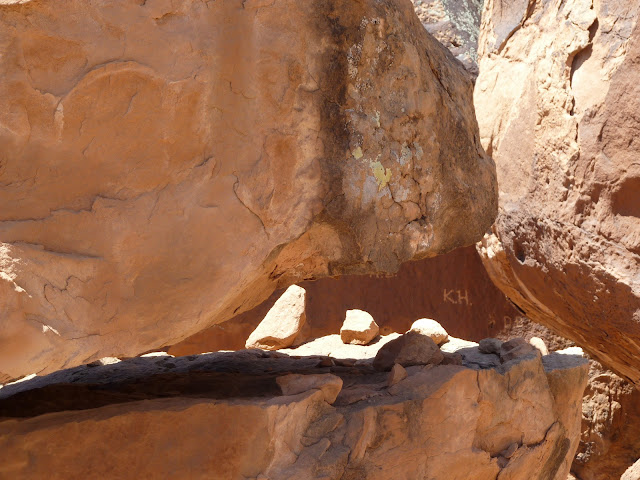 Someone had placed rocks like teeth in the "mouth" formed by a couple of boulders. 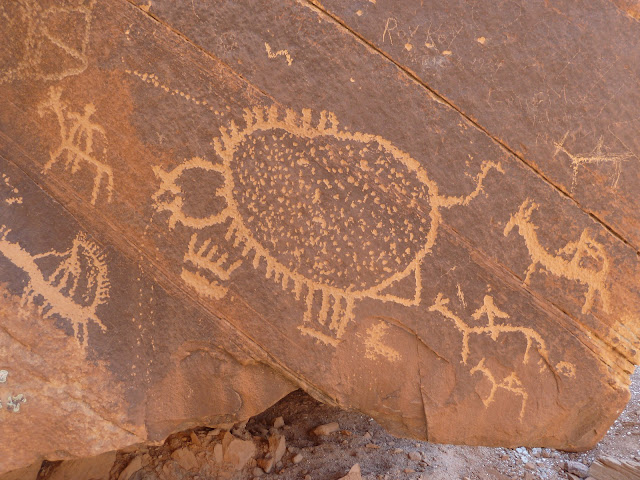 More petroglyphs. We never made it to the other canyon, as Jess's feet were bothering her too much. Time for new boots! 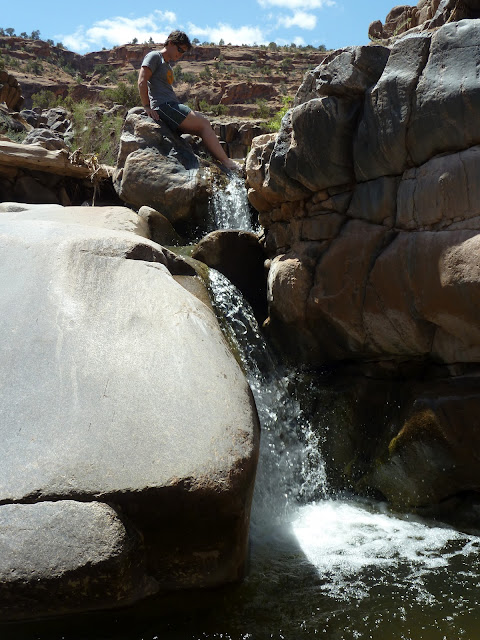 Here we came upon a lovely waterfall and spent the rest of the afternoon swimming in the pool, reading, and taking photos. In the evening, we built another fire to try to boil water for soup. We put it in a natural cleft in some rocks, which seemed like a very pat and clever way of having a firepit, but mostly I think they just kept oxygen from getting to the fire. Still, we did manage to cook the soup after about an hour of rearranging sticks and blowing on them. 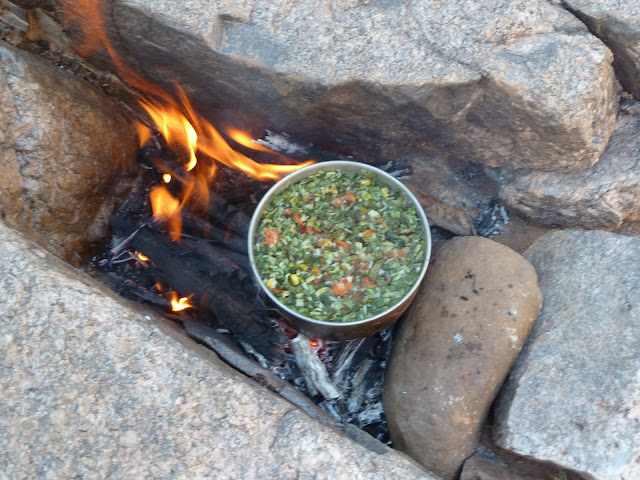 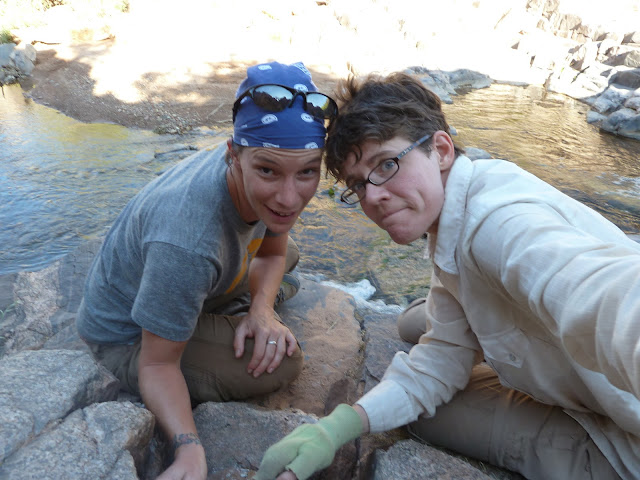 We have a better photo showing the soup too, but I'm so amused by the expression on my face I thought I'd post this one. 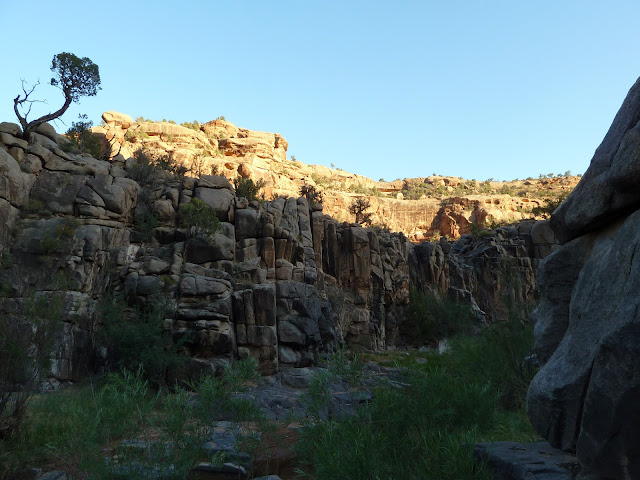 Sunset on the cliffs. 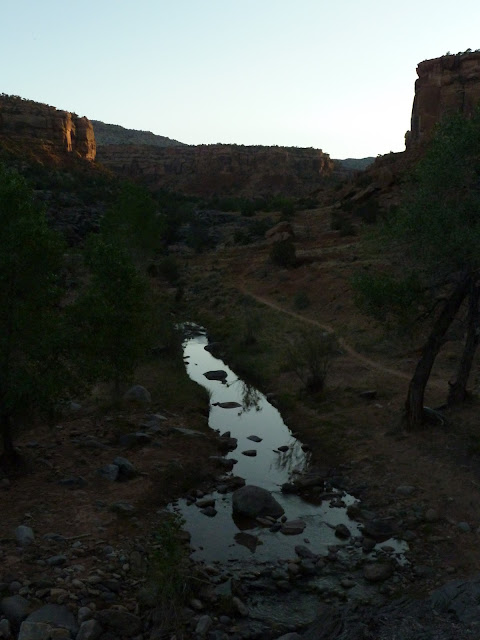 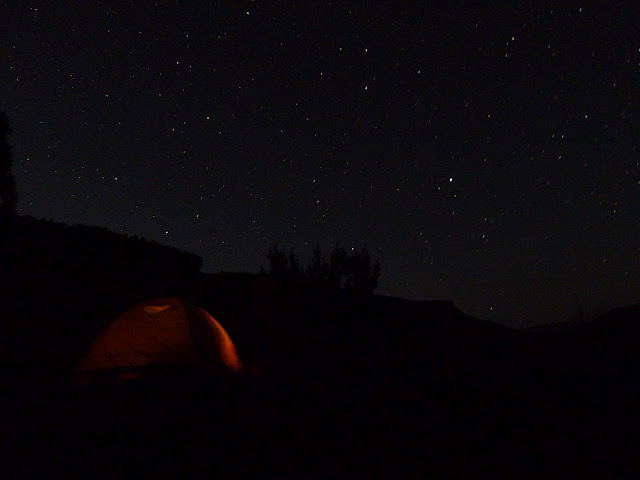 A time-lapse photo of our tent under the stars. We had crossed the creek and gone up a side canyon, coming on evidence of old trails, past cattle grazing, rusted metal. That night, Jess slept in the tent (in which she is reading a book in the above picture) but I slept outdoors, feeling fairly confident it wouldn't rain. I watched and watched for a shooting star but I don't think I saw one. I tried to remember if there were in fact more stars than this at Dinosaur, or in the Petrified Forest. I did not wake up during the night. 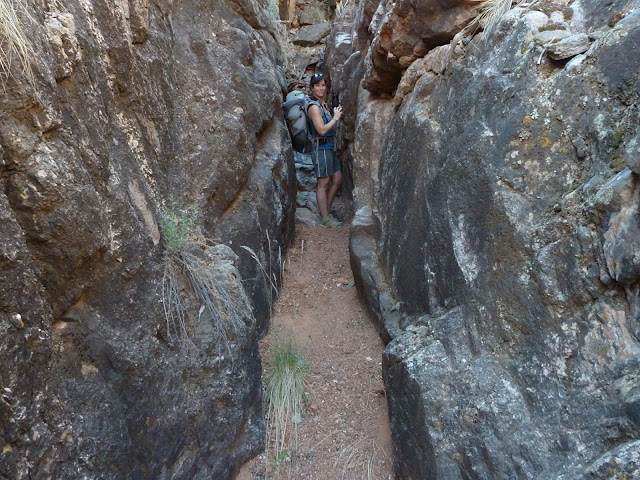 Jess poses with camera cocked in a cleft in the rock. 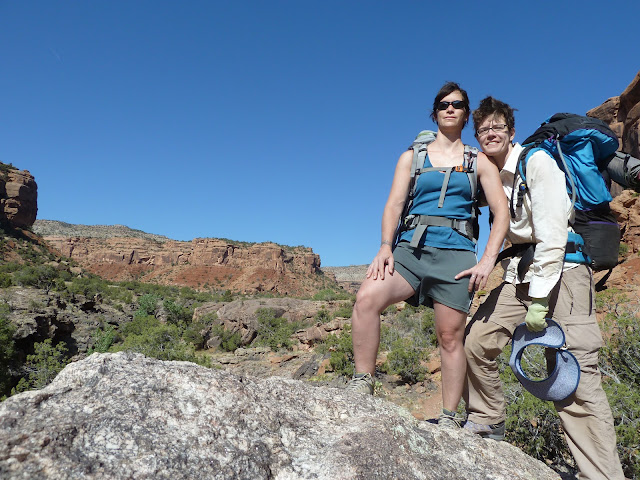 A final "group portrait." This had been my first backpacking trip of longer than a weekend, and while unique in that respect, it continued my fine tradition of having Things Go Wrong on just about every trip I take, which always leads to the best stories, and so I can't complain. And we had fun.

Coming soon will be the report of the trip I just took to Rocky Mountain National Park, in which we manage to render useless not one but two fuel canisters. Good stuff!
at 10:49 PM

I am so glad for that invisible tick mark in some invisible meter of personal comfort that you carry inside you.

Backpacking is increasingly becoming a very interesting field of travelling across the world. More and more people are becoming adapted to this new adventure which they love to go for.

Good trip log. I stumbled on this as I am thinking of attempting a loop between these canyons this spring. However there is not a lot of "on the ground" trip reports of the loop, specifically of the area on the plateau connecting the 2 canyons.
I understand that you didn't make it all the way to the top; did you have the topo or the Trails Illustrated guide? Is the route finding that difficult? It seems the trail up through Big Domingeuz is well traveled, but Little Dominguez isn't.
If you have any advice or pro-tips for attempting this, mind sharing?