I am going to talk about three things today. The first is very brief. Some of you may remember that in my last post, I spoke of waiting an hour at the DMV to find out that they wouldn't accept my CT birth certificate and told me to order a new one. My mother graciously got me one from the town I was born in and sent it out to me. Today, I waited at the DMV for four and a half hours and then, finally, shuffled up to the counter where I proudly presented all of my proper documentation.

I was told they couldn't accept my birth certificate because it was from the town. They needed one from the state.

My first thought was, no lie: "I am so glad I write a blog." Because writing a blog means there's a silver lining to every awful situation. Everything terrible that happens is fodder for a story. My sorrow is your entertainment. Hurrah, Colorado DMV, for bringing color to the lives of blog readers everywhere.

The second thing to talk about is the dance competition. Despite the fact that we had practiced constantly and improved a lot since the last competition, I and my dance partner (whom I'll call DP, which amuses me because it bears absolutely no resemblance to her actual name or her personality) were nervous. We had been watching one of the couples we would be competing against, and they looked very good. I had actually taken to referring to the lead as Darth Vader, because any great, evil figure always calls to mind the Star Wars nemesis for me.

I nearly keeled over when our Darth Vader showed up at the competition dressed in black with a giant black hat. It seemed to be an omen. 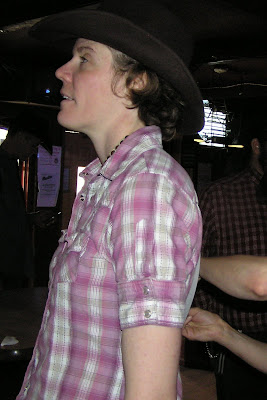 Here, DP pins on my number. I am wearing my new brown hat. If the bad guys wear black hats and the good guys wear white, what does brown signify? Morally ambiguous?

In this picture, I am exactly as tired as I look.

It was the organizers' second time running a competition and everything was tighter and more official. The contestants stood in the dimly lit basement, where you could hear a pin drop but for the committee head reciting the rules. We drew letters out of a hat to determine the order we'd dance our freestyle dance in. In the last competition, only the advanced couples were invited to perform a freestyle (any type of dance to any piece of their choice, as long as it had a country theme); this time, everyone was invited to. I had gone to bed the night before ready to improvise to our chosen song come game day, but the day of the competition, DP convinced me to come over and choreograph and actual routine to it, which we worked on for two and a half hours. 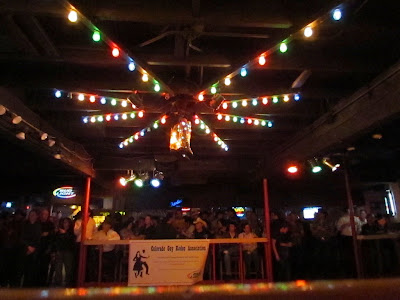 Above, our bar; below, close-up of the mirrored boots. 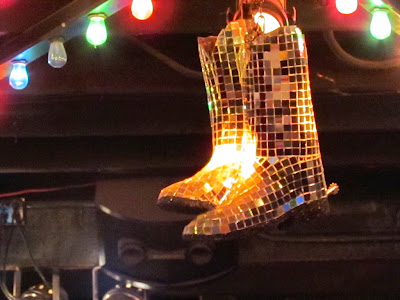 At six o'clock, the competition began, with an "open dance" in which everyone watching could participate and the contestants could warm up. Unfortunately, it was a line dance, and one I didn't know. I'm sure everyone knows what line dancing looks like, but in case anyone doesn't:


When the couples portion of the competition commenced, we danced the two-step and the waltz, sharing the floor with our nemeses, who were the only other couple signed up in our division. (At least we were guaranteed a ribbon again.) 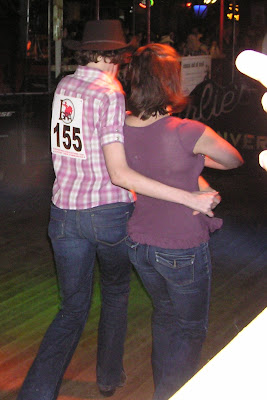 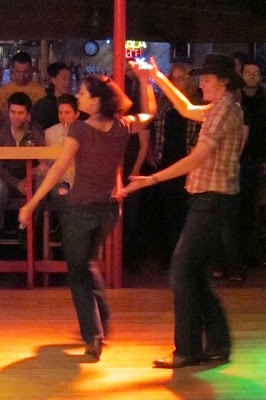 Then we waited while Darth and partner performed their freestyle. They not only had it choreographed, they'd made a show of it, complete with rudimentary storyline, acted out with gestures and expressions. We hadn't done that! The crowd was going crazy for their act; the hooting and clapping was earsplitting and nearly constant. Oh dear.

When it was our turn, we stood in our pre-planned location on the dance floor and waited. And waited. And then the organizer came up to us and told us something was wrong with the .mp3 file we'd handed them earlier in the evening; only 45 seconds of the song were present. Thankfully, the DJ had it (of course he did; they play it all the time); it was KT Tunstall's Black Horse and the Cherry Tree.

We tripped all over each other for the first 30 seconds. Whether we were shaken up from our technical difficulties or whether we'd have had nerves anyway, we once again danced a lot worse than we'd been doing in practice. The latter part of the dance went smoothly, and we enjoyed watching the higher-level couples perform... but toward the end of the night, when the judges were asked to choose a couple they'd enjoy seeing again, and they chose our competitors, I was sure we'd gotten second. Until I saw their encore. I might have watched it more carefully this second time--what I saw was that while they danced with more charisma than we did, I think (indeed, with more than most of the intermediate couples), they just didn't have as many moves as DP and I.

And so we won. 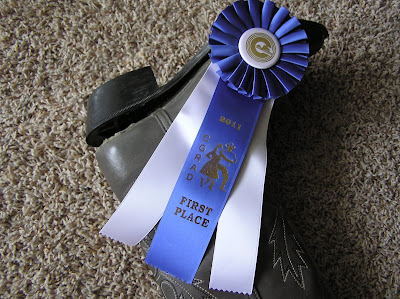 You will notice in this picture that the sole of my boot has pulled away from the upper. After the competition was over, I stayed and danced for another couple of hours, until I noticed my foot felt funny. I looked down and saw my boot coming apart. (In fact, both of them were broken, though I didn't notice till the next day.) Remember, I got these vinyl-and-plastic boots for $8 at a thrift store. They were glued and not stitched. I am shortly going to toss them in the dumpster; I don't see any point in repairing them. They will be casualties of battle.

I had tremendous fun at this competition. The audience was really into it, it was tightly run without much standing around or confusion (beside our own technical issue, really) and I feel we worked really hard and were rewarded for it. I don't know when I'll next be able to compete, but I'd like to move up to a higher division. As for the question posed in my last competition-related entry--can I enter a competition and dance just for fun?--the answer turns out to be that if I relax at least a little, the question itself becomes unimportant. I certainly cared about winning, but I cared more that we'd put together a great routine and danced very well in practice, whether or not we did in competition. We knew what we were capable of.

The third thing to talk about is this summer. I've accepted a summer position in one of the parks I passed through last fall, about which I wrote: "...the whole place is like a giant, beautiful puzzle in rainbow colors... I am quite sincere in my wish to work there and if that happens you will have a whole summer of posts and pictures of the place."

This is Dinosaur National Monument, whose beauty and complexity stunned me last September and where I became determined to get a job this summer. I have. I'll be doing geology and paleontology in settings like those below: 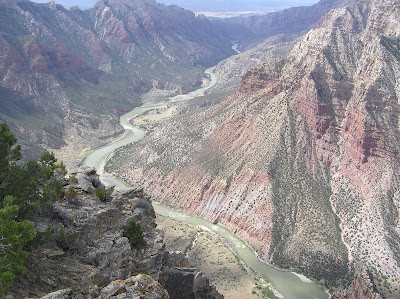 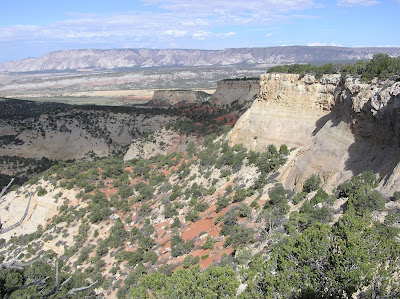 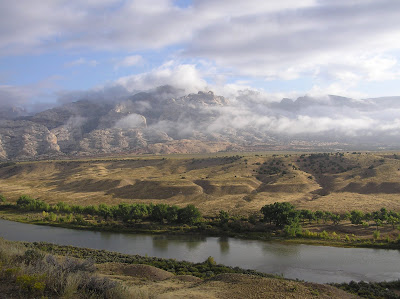 To see more, revisit my previous post on Dinosaur. Those of you who like to travel, take note: Dinosaur is about 6 hours from Denver, has a lovely campground just down the road from the housing I'll be staying in, and is, well, gorgeous. The nearby Uinta mountains offer even more hiking and sightseeing opportunities. I will be there May 23 through August 12 or so. Come out and I may even take you fossil hunting. Start making plans now!
at 11:19 PM 2 comments: Links to this post